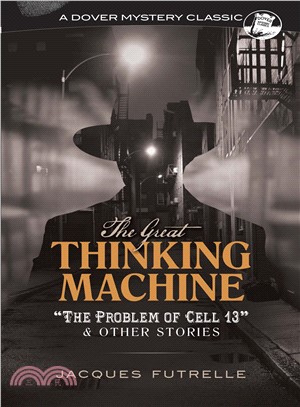 Suppose you were locked into one of the most secure prisons in America at the turn of the twentieth century. You've been put into solitary confinement, with periodic inspections by the warden, whom you'd informed that you would escape in less than a week. How would you communicate with the outside, how would you smuggle in tools and weapons, and how would you finally break out?
This was the situation confronting Professor Augustus S. F. X. Van Dusen, aka The Thinking Machine, in "The Problem of Cell 13," one of the most famous "locked-room" mysteries ever written. Eventually The Thinking Machine did escape, and his method is known to generations of fans. Less well known, however, is the fact that Jacques Futrelle wrote many other stories about this unique detective. This volume presents twelve tales of The Thinking Machine, adventures that concern a perfect alibi and a perfect accusation, an impossible theft of a container of radium, a precise sealed room mystery, a flaming phantom, and other "impossible" situations. Rich in Edwardian period flavor, the realistic tales anticipate many of the major developments in modern crime fiction.
Journalist, mystery writer, and novelist Jacques Futrelle (1875–1912) is best remembered as the creator of Professor Augustus S. F. X. Van Dusen, The Thinking Machine. Futrelle's stories achieved much acclaim in the United States, and the author was on his way home from a signing a contract for European publication rights when he perished in the Titanic disaster.
PrevNext