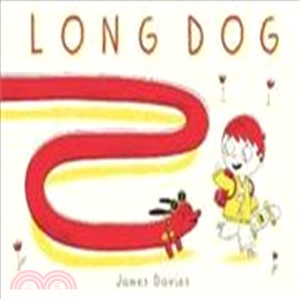 This is Long Dog. He's not skinny, or tall, or scruffy - he's long and we like it that way. Well at least I do. Mum and Dad aren't so sure. Especially when Long Dog gets stuck in the cat flap, or in the drain pipe, ... he can be a bit weird sometimes. But he has his talents too!

James and Long Dog are inseparable. Long Dog may be weird, but James doesn't see it that way - he just sees his best ever friend. Being long is awesome, even if nobody else thinks so. It means spaghetti hugs and extra long walks. Luckily, the other pets in the park don't seem so perfect either - and when they mysteriously go missing, there's only one dog in the whole world who's long enough to rescue them.

A hilarious picture book about unbreakable friendships and being yourself, by Meet the... author and illustrator James Davies.