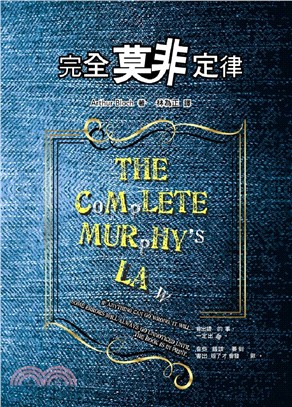 人生難免有又好氣又好笑的經驗，「莫非定律」正是關於事情如何出錯的幽默規則，簡練地揭露了「人生總難事事順遂」這條顛撲不破的真理。一切從「莫非原始定律」開始：「會出錯的事，一定出錯。」（If something can go wrong, it will.）

Have you ever received a phone call the minute you sat down on the toilet? Has the bus you were waiting for ever appeared the instant you lit up a cigarette? Has it ever rained the day you washed your car, or stopped raining just after you bought an umbrella? Perhaps you realized at the time that something was afoot, that some universal principle was just out of your grasp, itching to be called by name. Or perhaps, having heard of Murphy’s Law, the Peter Principle, or the Law of Selective Gravity, you have wanted to invoke one of these, only to find that you have forgotten its exact wording.
Here, then, is the first complete reference book of the wit and wisdom of our most delightfully demented technologists, bureaucrats, humanists, and antisocial observers, prepared and presented with the purpose of providing us all with a little Karmic Relief. The listing has been made as definitive as possible. In researching these interdisciplinary tenets, we found numerous redundancies (which verify the validity of the observations), frequent conflicting claims to authorship, and scores of anonymous donations. We are forced to acknowledge the contribution of the inimitable Zymurgy who said, “ Once you open a can of worms, the only way to recan them is to use a larger can.” By applying this Murphic morsel to the present volume, we come to realize that this project, once undertaken, has grown in size and scope as further principles, new and old, have been revealed by our beacon of truth.